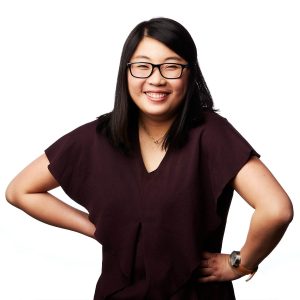 Assistant Project Manager | Architecture Group
First inspired from a college lecture discussing architect’s role during natural disaster events, Carol finds her passion with building better environment to improve people’s lives. After graduated from University of California, Berkeley, Carol first worked on a window and heater replacement project for a HUD-funded public housing complex, under a local community organization. She saw first-hand how construction activities could have an impact to end users’ daily lives, and also how the project could enhance their living situations. Since then, she wanted to get involved with the design and construction side, to be part of the team creating functional spaces at beginning of the process.

Fast forward, Carol now has developed her 10-year career within the architecture industry. Ranging from replacing exterior signage to working on nearly 100,000 sq. ft. new hospital tower built-out, Carol has involved with many projects with different schedule and budgetary requirements, while still creating functional and aesthetic spaces. Through her experiences with OSHPD projects, especially during Construction Administrative phase, she has developed skills to achieve thoroughness and accuracy within technical details and proper documentations.

She believes that a project constantly goes through discovery and solution stage, as it progresses through the design and construction phases. Carol has learned to work collaboratively with other stakeholders, to identify and respond to these varies design needs every step along the way. Through reviewing the codes, calling up engineers, reviewing field conditions with contractors, discussing cost impact with clients and many other tasks, she believes this approach of always identifying and responding to the most urgent needs for the project, optimizes each project’s greatest outcomes and in return, brings success to the projects.

Since joining Vegas Builds in 2017, she has been involved with at least eight equipment replacement proje
Growing up in Macau, Carol lived with her parents and her older sister in the most densely populated special administrative region of China, until the age of 14. Although most people know of Macau as the “Asia Las Vegas” because of its recent developed casinos, the city actually had a rich history of both Oriental and Western influences. Carol’s childhood involves walking to the Portuguese Architecture influenced library building and reading Chinese books.

Since immigrated to San Francisco to attend high school, Carol has lived in the San Francisco Bay Area. While attending college at Berkeley, she has an opportunity to study aboard in Italy for a school semester. Through the weekly extrusions and unique experiences traveling many European countries, her love with Architecture had grown and enhanced her belief in working within the building community.

After spending her entire life living within urban metropolitan cities, Carol recently moved to the City of Concord with her fiancé. Besides spending her time in crafting the art of building, she can be mostly found to clean up around the house, shop for the next appliance and play with the community cat. she also enjoys playing tennis, hanging out with friends and walking around trails in the neighborhood parks at times.